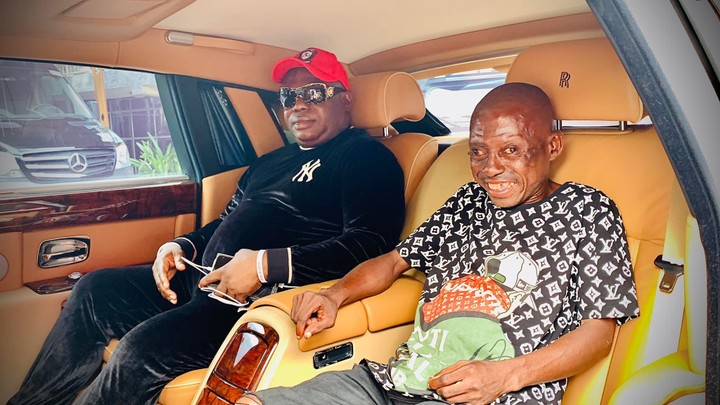 He is the founder of Omega Power Ministry, OPM , To Contact Apostle Chibuzor Gift Chinyere , Please use the details below. +2348033385271 reachout​@opmworldwide.com

Chibuzor has his share of hurried moments in life. He fled Port Harcourt for Lagos in pursuit of greener pastures, sleeping beneath the bridge until he could obtain a job as a janitor with the Nigeria airport authority. To make ends meet, he also worked as a security guard and sold GSM recharge cards.

He belonged to the Jehovah Witness religious sect but had chosen to follow the Pentecostal path. He became a house fellowship teacher after discovering the mountain of fire ministry. He quit the Mountain of Fire Ministry to become a gospel preacher on his own. Four years later, under God’s inspiration, he formed the Omega Power Ministries, also known as (OPM), where he served as Apostle and General Overseer.

He created a humanitarian enterprise named The OPM Foundation, a foundation that launched the man of God to the world as many souls were favorably influenced by his humanitarian efforts all over the world.

The foundation’s accomplishments include rehabilitative empowerment, training, and alms-giving.

The charity established and commissioned the Free Computer Training Centre in Elele prisons in 2010. Many convicts, including prison warders, have graduated from the system by now.

Through the construction of free computer training centers in Nigeria, the OPM Foundation has taught thousands of Nigerians in basic computer programming, Microsoft Excel, Power Point, and other computer programs throughout the years. The majority of those who benefited are now prospective computer experts in both the public and commercial sectors.

For almost seven years, the foundation has been awarding university scholarships, beginning with each indigene from Nigeria’s federated units.

The Foundation established a free tailoring and computer training center in Rumuji town, Emuoha LGA, Rivers State, in 2012. The initiative has helped a large number of individuals in the region, including non-indigenous people.

The organization also provided and commissioned a water well for the residents of Rumuji and neighboring villages in Nigeria to help ease the area’s water deficit.

There is now an active OPM Free Restaurant that caters to the disadvantaged Nigerians that was started around 4 years ago.

A free nursery and primary school is now operating in Ohanku, Abia State, where children from low-income families may get a basic education. OPM In Port Harcourt, free education is also available at four sites, with free four pieces of uniform, free sandal, free launch, free computer instruction, free text and exercise books, a completely air-conditioned class room, and an equipped laboratory. The OPM Foundation provided this. To assist the less fortunate students, many of whom arrived at school with empty stomachs, OPM instituted free food in the school.

In 2015, Apostle Chibuzor funded a trip to Paris for underprivileged youngsters. The Foundation supplied a free water borehole for the indigenes of Nkpukpuwa village in Abia State. National Network, vol. 9, no. 43, page 10 (October 31-November 6, 2012). A foundation that gathered a huge number of impoverished from the streets of Port Harcourt and beyond in October 2011 at the OPM Church headquarters in Eliozu, fed, clothed, and distributed money packages to the recipients. The Verite newspaper, Vol. 7, No. 44, November 1-7, 2011. A charity that has created free housing complexes in Rumuokwurushi, Rumuoigbo, and Aluu communities for Nigerians to live in. Not to mention the development and distribution of two-bedroom apartments to so many widows.

In an effort to expand his humanitarian activities beyond Nigeria’s borders, this foundation relocated to Houston, Texas, specifically to down town street, USA, where the American underprivileged were not only ministered to but also nourished.

The creator of this charity recently commissioned a Multi Skill Acquisition Centre in Port Harcourt to teach Nigerians in oil and gas and other specialist fields, and over 6000 Nigerians have completed training.

The Foundation also rebuilt an Ikuorie Comprehensive secondary school in Ohanku Ukwa East LGA of Abia State that had been in disrepair for more than ten years, outfitted it with computers, and powered it with a generator.

Recently, Apostle Dr. Chibuzor sponsored 140 wedding couples, and he provided the men monies to pay for the bride price to their stunned in-law, many of whom had given up hope that such honor will ever come their way. He went ahead and paid for the couples’ wedding outfits and suits, as well as refreshments for the invited guests at the reception ceremony.

Apostle Chibuzor’s humanitarian work via the OPM has earned him worldwide and local recognition from prestigious institutions and organizations, including an Honorary Doctorate Degree in Theology from Freedom University and Theological Seminary in Philadelphia, USA, in 2011.

He holds an honorary degree in Illusions and Evangelism from Houston’s School of Ministry and Mentor Academy. A RECIPIENT OF AN AWARD FROM THE NDOKI COUNCIL OF CHIEFS AS THE PILLAR OF HOPE. In September 2012, the National Association of Nigeria Students presented him with the Golden Award for outstanding philanthropist. The GoodNews Magazine named him the brave preacher of the year in 2013. He is a winner of the Inter-Religious and International Federation for World Peace’s Ambassador for Peach Award.

He is a member of the Institute of Industrial Administration.

The Niger Delta Nonviolent Movement also recognized him as a peace advocate/youth empowerment.

Weekly Watch Newspaper has named him the greatest generous man of God.

The national union of Ndoki students honored him with the Man of Great Vision award.

The Association of Field Reporters’ Humanitarian Pastor of the Year award.

The Verite newspaper presented him with the Peace Setting Leadership Award.