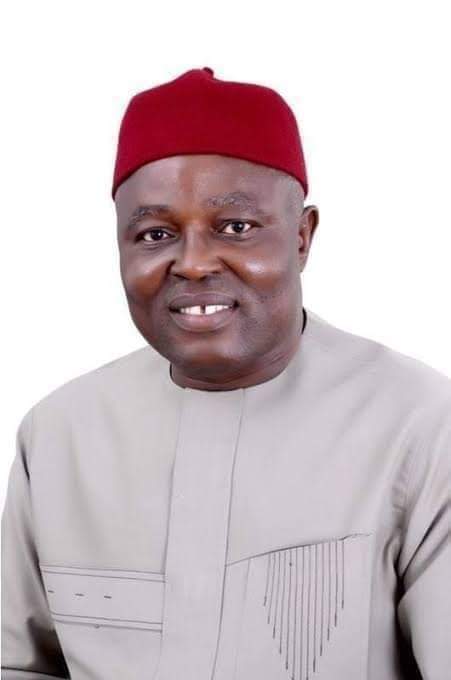 Biography Of Austin Umahi – Age , Wife , Children , Net Worth – The name Austin Umahi is the new signature tune in the contest for Ebonyi South Senatorial District. And the zone’s new identity and branding will continue to shape the region’s political scene in the coming years.

Ochiagha Ndigbo, as he is affectionately known, has continued to straddle the political landscape like a colossus, much like the Phoenix, which appears in Greek mythology as a near-immortal bird that revives itself into newness and significance.

In 2023, the political Field Marshal will re-enter the political arena as the Senator to represent Ebonyi South District, which includes Ohaozara, Onicha, Afikpo North, Ivo, and Afikpo South LGAs.

What makes him so remarkable is that time and age have been unable to dampen his cyclically regenerated endowment as a notable leader. He was admitted to the University of Jos in 1992 to study Accountancy. Austin Umahi demonstrated that he was a born leader when the students overwhelmingly elected him as President of the Abia State Students Association before to the formation of Ebonyi State. It is documented that he was the first President to secure scholarships for Abia kids attending university. He was also the University’s Liaison Students Officer and graduated in 1996 with a 2nd class upper in Accounting.

Deacon Austin Umahi’s appointment as National Vice Chairman of his old party also elevates him to a position of prominence in politics. No one would dare to deny him the credit for bringing stability to his previous party as Regional Leader. He not only bolstered PDP households in the five Eastern states, but also marched the party to victory in Imo state at the time.

The job not only provided him with insight into detailed party concerns, but also allowed him to demonstrate his worth as a leader par excellence. His ability to skillfully manage a dominant party organization in a geopolitical zone demonstrates his immense intelligence. His intellect is a powerful negotiating chip for him.

Interestingly, Chief Austin Umahi has remained a level-headed politician, going about his business in a calm manner. He avoids controversy as much as possible. However, this is not a sign of weakness; Ochiagha may look calm, but he understands the political game better than others.

Underestimate him at your risk; he is the ace of strategic instinct, extremely humble yet dangerously a master planner.

No one is capable of correctly dissecting and diagnosing the guy.

Experts in the study of body language and gesture are still in awe of the guy, political clairvoyants are still in the dark about the man’s impenetrable character, and close aides have become strangers to the inner workings of this Uburu born political enigma’s mind. He is undeniably a brilliant thinker, which is why he has remained a mystery.

As the man of the people, Ochiagha Ndigbo stands tall.

His people’s and supporters’ adoration for him has made him a formidable opponent. He retains popular praise throughout Ebonyi South District, in addition to his charismatic mass appeal and rock-solid grassroots support that has nothing to do with his political dynasty.

Constituents will be assured that they are being represented by a competent, experienced, and versatile individual who will not only display sound diction and capacity for articulacy on the floor of the senate and successfully put through a lot of bills that will eventually become laws of the Federal Republic of Nigeria, but will also dutifully and productively represent his electoral space by attracting the much-desired democracy.

Regardless of what is going on in Nigerian politics today, where self-promotion is the order of the day, Ochiagha is still one of those who mean well for humanity and whose intention and action is to grow two ears of corn where only one grew; to build bridges for those who could not access the other end of the divide; and to generally become God’s instrument used for bringing succor to humanity.