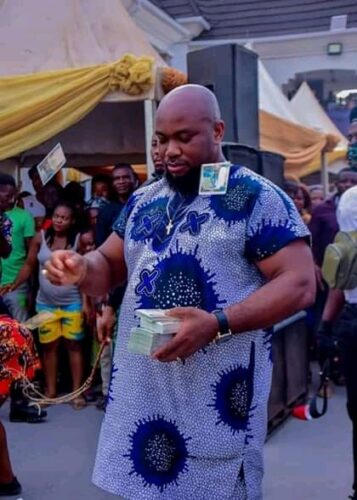 This is one of the richest man in Igbo Land of Net Worth Close to 1 Billion Dollars.


High Chief Ifeanyichukwu Ekeokwu – Anyiego of Amiri is a celebrity Businessman who became popular for spreading a huge sum of money at an event.

On Sarturday 16th Of January 2021 , High Chief Ifeanyichukwu Ekeokwu – Anyiego of Amiri Can back to life after spending 1 Day in a Motuary , Story claimed that he died before going to the mortuary , while some believed that he went to spend days with corpse for spiritual power !!!

The story is yet to be verified ….

An Imo State philanthropist, High Chief Ifeanyichukwu Ekeokwu popularly known as Anyiego of Amiri came back to life after he was declared dead.

Church Loaded gathered that the body of Anyiego was already deposited at the mortuary and had spent one day there but later woke up.

A Facebook user called Godwin Chijioke shared the good news of Anyiego’s resurrection with a video of his community people celebrating.

“Wonders shall never end!. God has sent back High chief Ifeanyichukwu Ekeokwu back to the world to complete his philanthropic work. Praise the name of almighty God!!! ANYIEGO of Amiri, Imo state is back to life this evening after a day of his death!. Is good to be good. Heaven recognizes those who help the helpless!.”