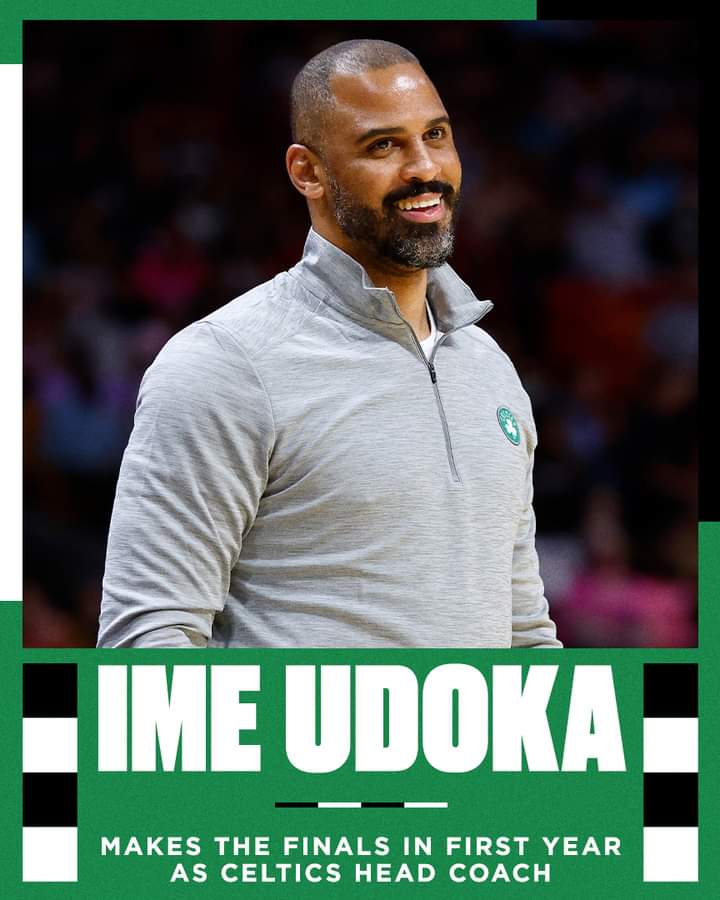 Biography Of Ime Udoka – NBA Nigerian Coach – Ime Udoka and the Boston Celtics beat the odds on Sunday night, defeating the Miami Heat 100-96 at FTX Arena to become the first team in franchise history to win a Game 7 on the road since 1974.

Boston advanced to the NBA Finals for the first time since 2010, a fairy-tale ending for a team that was under.500 at the halfway point of the regular season.

Ime is in his first season as an NBA head coach, and his team will meet the Golden State Warriors in the #NBAfinals.

On August 9, 1977, he was born in Portland, Oregon to a Nigerian father and an Illinois mother. He went to Jefferson High School in Portland.

He played for the Portland Trail Blazers, New Jersey Nets, Sacramento Kings, and San Antonio Spurs after being drafted by the NBDL. He takes on the position of a small forward.

Career in the National Team

Udoka was a member of the Nigerian National Team, also known as the D’Tigers. Udoka led Nigeria in scoring, assists, and steals at the 2006 FIBA World Championships. He also represented Nigeria at the FIBA Africa Championships in Algeria in 2005 and Madagascar in 2011, collecting a bronze medal in both competitions.

Udoka joined the San Antonio Spurs as an assistant coach for the famous Gregg Popovich in August 2012. Udoka would win his first NBA title in 2014, when the Spurs defeated the Miami Heat 4–1. He stayed for seven (7) years.


Udoka was signed as an assistant coach for the Philadelphia 76ers in June 2019. Brett Brown, Udoka’s head coach with the 76ers, previously coached for the Spurs under Gregg Popovich, and the two were on the same staff for the 2012–13 season.

Udoka was appointed as an assistant coach by the Brooklyn Nets on October 30, 2020.

Udoka’s coaching job on the 2019 FIBA World Cup squad allowed him to form ties with Celtics players Jayson Tatum, Jaylen Brown, and Marcus Smart, all of whom campaigned for his hire as the next head coach in Boston.

He then served as an assistant coach for USA Basketball under Spurs head coach Gregg Popovich in the 2020 Summer Olympics in Tokyo, when the US Men’s team won gold.

Udoka was named as the Boston Celtics’ head coach on June 28, 2021, marking the team’s fifth head coach of African descent. This also made him the NBA’s first Nigerian head coach.

Udoka and his partner, Nia Long, have a kid (Kez Sunday Udoka).

Mfon, Ime Udoka’s elder sister, played for the WNBA and D’Tigress before becoming an assistant coach for the Nigeria Women’s Basketball Team.