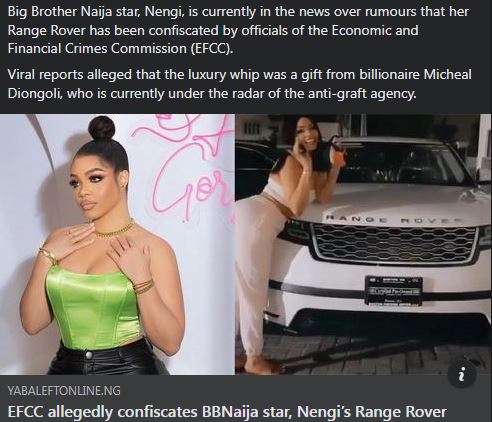 Biography Of Michael Diongoli – Age , Wife , Net Worth – Big Brother Naija star, Nengi, is currently in the news over rumours that her Range Rover has been confiscated by officials of the Economic and Financial Crimes Commission (EFCC).

Viral reports alleged that the luxury whip was a gift from billionaire Micheal Diongoli, who is currently under the radar of the anti-graft agency.


Michael Diongoli, a Ponzi scheme operator, was brought before a Federal High Court in Lagos State on Monday for allegedly defrauding a retired Army colonel, two professors, a co-operative organization, and others of N1, 286, 580, 656.

Diongoli is charged with eight counts of conspiracy, false pretenses, and fraud.

The defendant appeared in court with his two companies, UK-Don Group and UK-Dion Investment Limited, before Justice Lewis-Allagoa.

He was accused of scamming his clients by falsely promising numerous returns on investment within six months to a year.

The prosecution, Chief Superintendent of Police Mrs Susan Ezema, informed the court that the accused allegedly committed the crimes between December 2021 and April 2022.

According to Ezema, the offenses violated sections 8 (a), 1(1) (a) of the Advance Fee Fraud and other Fraud Related to Offences Act 2006 and were punishable under Section 1 (3) of the same Act.

The defendant, on the other hand, pled not guilty to the counts leveled against him.

Following his plea, Mr Olalekan Ojo (SAN), his attorney, informed the court that his client’s bail application had been submitted and served on the prosecutor.

In her response to the motion, Ezema informed the court that, despite the fact that the defence counsel informed her that the bail summons had been served on the prosecution, she had yet to receive it.