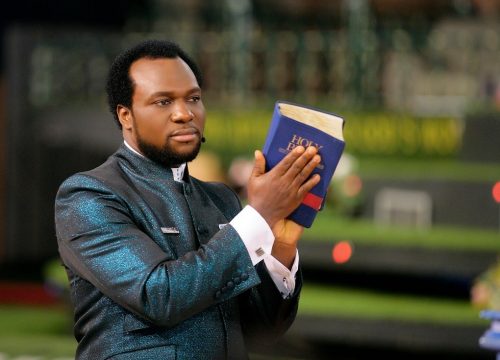 Biography Of Wise Man John Chi (Wikipedia and Profile) , AGE , FAMILY , WIFE and History of John Chi At SCOAN Will be shared below , note that he was raised by Late Prophet TB Joshua.

Wise man John Chi was born on September 26, 1976 in Esu –Wum, Menchum Division of the North West Region of Cameroon out of a union between Mr Chi Victor and his wife Chi Lucy Ekange.


He left Primary School in 1989 and lacked funds to continue in secondary school. He then learnt motor electricity yet stopped for want of money. So, he left for the South West Region and worked with Honorable Efite Andrew as house boy. One day in Mutengene, he saw a crowd listening to a preacher and went closer. Suddenly, the preacher spotted him out and prophesied to him saying: ‘God is going to use you mightily, make you a great and famous Prophet that would be known all over the world’. He took him for a fake pastor.

A few days later, his church pastor from Sierra-Leone said the same thing as above and declared a period of fasting, he accepted but broke the fast before the due date. When it ended, he asked him to accept the calling,he was perplexed. The pastor continued saying God had asked him to take him John Chi to his country. Finally, he told John to be humble and leave the rest to God.

In December 1999, they reached Lagos, Nigeria. The pastor lodged him in his friend’s home and left. One day, the half paralyzed head of the household said he had a vision in which God told him to ask him not to continue to Sierra-Leone and that God showed him his star. He then asked John to join the SCOAN free evangelical school, which he did. After John’s first day at SCOAN, he realized the need to know more about Jesus Christ our Saviour.

Back home that night, he asked God to reveal who Prophet TB JOSHUA is. John fell into a trance, found himself in a room lit by the rays of a large star, he heard a voice saying, “stand up and go outside” which he did. There, he saw three men dressed in white, all looking up to the sky and saying “Hosanna to the God of Prophet T. B. Joshua” There stood the latter staring at him, he woke up. Funny enough, the song he had been singing before going into the trance was still on his lips. The following night, he was again caught up in a trance and saw a man standing by his bed side. His body was like bronze and his eyes blazing like fire. He led John to Cameroon where he showed him places to be developed. Finally, he said to him “whatever you ask the father in my name, I will do. Now conscious, the words he had just repeated after him were still on his lips.

Sometimes later, the pastor who brought him to Lagos went back to his country without him since he had started worshipping at SCOAN

One day, a man told John to follow him to Prophet T B Joshua’s office, from there he was sent to Akure for evangelism. When the mission was over, he thought of going back to Cameroon and start a business venture. In a dream, Prophet T B Joshua met him and said, “You are not going anywhere for now, you’re supposed to be in vendor class” John began doing well in class. As time went on, he saw the man of God in a dream and he said to him, ‘if you continue this way, you will make Cameroon great’ I he woke up.

He narrated the dream to Mr Mbawa Patrick and the others in the sitting room. One of them, Mr. Joachim, went to SCOAN and told the coordinator, who related the dream to Prophet TB Joshua. The latter invited John to SCOAN and inquired about the dream. That was how John was admitted into the vendor class. He is greatful to senior prophet T. B. Joshua for what the Lord has used him to do in his life. Again in the year 2010, while on his usual assignment on the mountain, he had a vision that got him scared. In that vision, he died and his spirit left him. He found himself before a huge gate with Michael as gate keeper. All the dead were in a queue. Michael had a big book in front of him. Whenever he asked someone to come forward, that book would be opened and the person’s life on earth was cross checked. If you were qualified, the gate will be opened for you to go in but, if your case was the opposite, you will be sent to a desolate place.

When it was John’s turn, Michael opened the gate and asked him to go in. Once you get in, you are shown into a temple where everyone is dressed in white. The latter came in from the gate and told them that the high priest was soon going to come out. While waiting for the high priest’s arrival, everyone present listened to Senior Prophet TB Joshua’s message. When the high priest and the elders came out, Michael was among them, The High priest was led to the throne. John could not see his face, but for his hands, feet and the spots where he was nailed. He recognized a few people who came in through the gate with him. Later, the high priest started commissioning them.

He called the first person and assigned him an evangelist and made another a pastor. Then came to John’s turn, he pointed at him, and said, ‘I am sending you as a prophet’. Moreover, He gave him a small cross, and asked what he desired. John requested for grace to fellowship with Him. His request was granted and he came down on Earth and woke up.

Terrified, he told his colleagues about the dream. A few days later on the mountain, he had another vision wherein he died and his spirit left him. The spirit watched his casket being carried in a Limousine. As the vehicle was about leaving for the village, it split into two. The front part carried his corpse while the rest of the car carried his spirit. At the village, the grave had been dug and the casket was taken for burial. His spirit went to the grave to view the corpse for the last time before burial, the faces of Apostles Paul, Peter, Elijah and Ezekiel were what he saw and was frightened. He identified their names on their foreheads, he woke up. John told his colleagues everything he saw. A week later, Prophet T. B. Joshua anointed them in the office of men of God.

He is now in Cameroon, the G.O of Ark Of God Covenant Ministry now known as Apostle John Chi