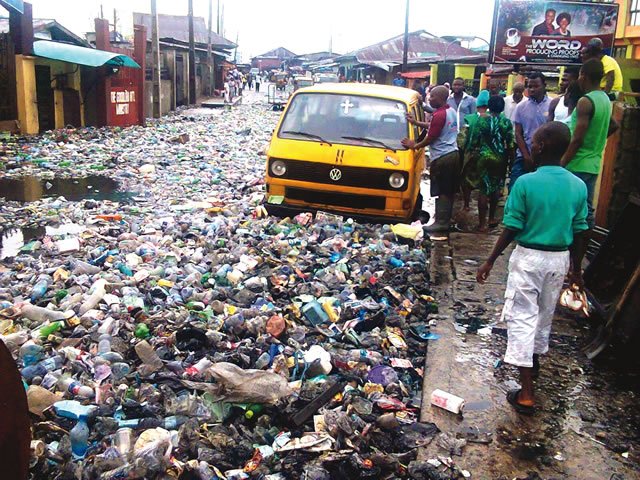 Nigeria is an indigenous country that is home to people from over 300 tribes. It is also the most populous country on the African continent, and the threat of overpopulation is frequently coupled with massive amounts of trash created by inhabitants.

The country is still considered to be one of the many developing nations of the world, and waste mismanagement is a common issue encountered by countries labeled as “developing nations,” and Nigeria is no different.

Many Nigerians are filthy, and a stroll or drive through some of the rural/underdeveloped regions in places like as Lagos would leave you amazed at how filthy some Nigerians can be. This is not completely the responsibility of the people, since the government contributes to the problem by failing to provide suitable waste management facilities such as dump trucks, good garbage bins, and environmental officials to guarantee wastes are properly disposed of.

The rating data for this post was obtained from several internet surveys to determine what ordinary Nigerians believe, as well as from non-governmental organizations (NGOs) such as Clean-Up Nigeria, the United Nations Environmental Programme (UNEP), and others.

Without further ado, here is a list of the dirtiest states in Nigeria right now.

Lagos is Nigeria’s richest and most developed state, although it still falls short in terms of overall cleanliness and trash management. This is largely due to the state’s current overpopulation and mass urban migration, which does not appear to be improving anytime soon.

A visit to some of the most popular bus stops and even roads will amaze you at how filthy Lagos state can be despite being the most developed state in the country. Many people feel that Lagos’s filth problem is the result of mismanagement and underfunding at the state’s waste management agency, LAWMA, while others say that most Lagosians are unclean by default.

Lagos state is currently ranked as the dirtiest state in Nigeria, and while the state may be one of the best and most developed in the country, officials in this state must do more to raise awareness of and deal with the massive waste generated by its residents.

2) The state of Abia

Abia state is another another filthy Nigerian state, with inept bureaucrats long in charge of the state’s operations to blame. Unlike Lagos, Abia state does not have an overpopulation problem, yet it is nonetheless filthy.

Aba, Nigeria’s largest manufacturing and commercial hub, is one of the cities in Abia state that is now plagued by filth, with waste piled everywhere and no one appears to care.

To add to Abia state’s already existing trash problems, the state is also plagued by erosion and floods, making certain locations incredibly difficult to live in if one is concerned about living a healthy life.

3) The state of Anambra

Anambra is another South-western Nigerian state where untidiness is a concern. It is also the third dirtiest state in the nation.

The dirtiness problem in this state is primarily due to the incompetence of waste management officials, as well as residents who do not appear to care. A visit to Onitsha, the state’s most populous metropolis, would leave you astounded at how untidy the city seems.

Most people feel that the administration of Anambra state is not doing enough to penalize garbage offenders and revitalize the state’s waste management agency. Fortunately, the current governor is working hard to address this issue.

4) The state of Kogi

Kogi state is one of the least developed states in the country, and this underdevelopment is often accompanied with a problem of filth among residents who are inadequately informed on the hazards of not taking proper care of their surroundings.

The state is also dealing with insurgency and banditry, which are now destroying northern Nigeria, which may be one of the reasons why waste management is sometimes disregarded by the state administration since they have more serious matters to deal with.

5) The state of Kano

Kano is Nigeria’s second most populous state, and as predicted, the state suffers from garbage mismanagement. The state is also one of the Northern states with a strong level of economic activity, but the environment is little to write home about.

People trash the majority of Kano’s marketplaces and bus stations due to a shortage of garbage trucks, rubbish containers, and environmental inspectors. Corruption also plays a significant part in the state’s current situation, since most monies designated for supporting waste management organizations are taken by unscrupulous public officials.

6) The state of Osun

Osun is the second South-Western state on our list, and it is one of Nigeria’s dirtiest. The trash crisis that this state is presently suffering is the result of its residents’ carelessness while disposing of their garbage, and some blame also belongs to the state government for failing to effectively manage its waste management agency.

Most marketplaces and important highways in this state are filthy, and residents dump their garbage in unusual areas such as on the road or anyplace they like.

Nassarawa State, although having some of Nigeria’s abundant natural riches, is one of the states in Nigeria that is now dealing with the issue of dirtiness. This state also happens to be directly next to one of Nigeria’s cleanest cities, the Federal Capital Territory of Abuja.

The state is also one of the Northern states in the country experiencing the Boko Haram insurgency and banditry, which many say has added to its uncleanliness problem.

Zamfara state is another Nigerian state that has been hard struck by terrorism, illiteracy, and corruption. These vices have made a significant contribution to the state’s current predicament.

A visit to some of the state’s most popular cities will leave you astounded by the state’s degree of trash mismanagement. As previously said, corruption is a huge issue here, as extra cash intended for paying these waste management companies are nowhere to be found.

Kaduna state is Northern Nigeria’s economic powerhouse, but it also has a problem with filthy residents. The state’s waste management body, Kaduna State Environmental Protection Authority (KEPA), is likewise underperforming in its mission.

The state of Kaduna has done well in cleaning some of the big cities, such as the capital city, but has overlooked other lesser cities and small villages in their waste management efforts.

The Ogun state administration may be doing a decent job of keeping the state’s capital city clean, but most of the state’s local towns, cities, and markets are still filthy and littered with garbage dumps, earning the state a position on this year’s list of Nigeria’s worst states.

There you have it, an updated list of Nigeria’s dirtiest states right now. As previously stated, the states are based on data obtained from online surveys, recognized environmental authorities, and non-governmental organizations (NGOs) to avoid bias in the list.

We’d love to hear your thoughts on this. Do you believe any states deserved to be included on this list? Should any state be eliminated? Please share your thoughts in the comments box below.