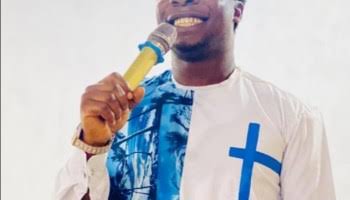 Biography Of Pastor Ade Abraham – ₦310,000 Each To ‘Fly Them To Heaven’ – Pastor Ade Abraham, a Nigerian pastor, is smiling all the way to the bank as his church members line up to pay him N 310k apiece to bring them to paradise.

Ade Abraham, a Nigerian pastor, charges church members N310,000 each to ‘fly them to heaven.’


Abraham also promised the members that they would “ascend to heaven united from the site in Ekiti.”

Ade Abraham, pastor of Christ High Commission Ministry, also known as Royal Christ Assembly, Kaduna State, has persuaded members of his congregation to join him to a camp in Ekiti State to “prepare for the end of the world.”

According to reports, the preacher originally moved to Ekiti State from Kaduna State, where he had previously resided, in 2020.

He then came to Kaduna State in April, requesting N310,000 from each member of his church before allowing them to accompany him to Omuo-Ekiti, where “the gates of heaven will open for all of them to go to paradise.”

Abraham reportedly guaranteed the members that they will all ‘ascend to heaven together from the spot in Ekiti,’ according to our source.

“My relative has also urged her daughter, who is studying overseas, to return to Nigeria, or else the pastor (Abraham) would force her to do an offense that will land her in jail,” the source claimed.

A WhatsApp chat acquired by the publication backed up the source’s account. The dialogue mirrored what the pastor’s follower told her daughter.

“Daddy Abraham said I should tell you to come back, that he is the one who forces you to come down to Nigeria [sic] and I was the one who gave you the opportunity to return back there, that I should also know how you will come back [sic] or he will force you to commit an offense over there and they will put you in prison.” “That he probably sent you down so you may attain your aims [sic],” stated the conversation.

“Please, Elizabeth, if there is any way you can aid yourself to return, I will be grateful [sic].” Don’t let Daddy get you into any trouble.”

Another church member who is now at camp in Ekiti stated that Abraham’s campers continue to go about their daily lives on regular days.

According to the follower, “saved members” abandoned their “previous life” in Kaduna on April 6 to join the pastor in Ekiti. He stated that they would remain in the pastor’s tent “until the day of rapture.”

According to the member, Abraham still attends church on Sundays and Wednesdays.

“We are not returning.” “I can’t go into specifics,” the member remarked.

“From here, we’re going to produce rapture.” We’re on our way to paradise.”