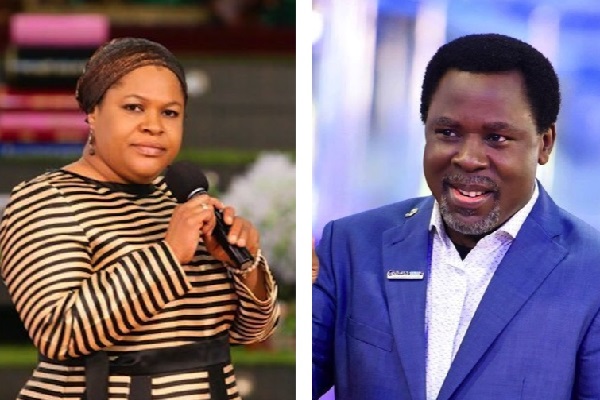 The celebration, which was also attended by followers from several international countries, was filled with nostalgia for the glamorous and spirit-filled worship among the people during the days of TB Joshua.


In memory of the dead preacher and benefactor, the church has been operating on the low-key since his death.

The focus of the service was “Celebrating the Life and Legacy of Prophet TB Joshua.”

Pastor Freyle from Colombia, Pastor William Ghaltas from Bethlehem, Pastor Obispo Elvis from the Dominican Republic, and Bishop Trevor Williamson and wife from the Bahamas were among the many international gospel pastors who attended the event.
Pastor Bernard Mulder of South Africa and Bishop Steven Ogedengbe of Nigeria were among the others.

Mrs. Joshua noted that the church’s next major focus would be to complete its prayer mountain in Arigidi, Ondo State, which was to be unveiled later at the occasion.

She claimed it was one of the late prophet’s most vivid dreams.

Mrs. Joshua was commended by Governor Babajide Olusola Sanwo-Olu, who was represented by his Special Assistant on Christian Affairs, Rev Bukola Adeleke, for maintaining her husband’s legacy and especially for the inauguration of the museum.

Mrs. Joshua and the congregation received greetings from Governor Rotimi Akeredolu and the people of Ondo State through Deputy Governor of Ondo State, Lucky Ayedatiwa.

Cross River State Deputy Speaker, Joseph Bassey, also gave a message from his state governor and people, emphasizing that “as long as God exists, Synagogue Church of All Nations will not perish.”

He pledged to come to the church after the election to give witness.

Worshippers during the gathering also prayed for God’s guidance on the church’s leadership.

TB Joshua, 57, was a Nigerian preacher, televangelist, philanthropist, leader, and founder of The Synagogue Church of All Nations.