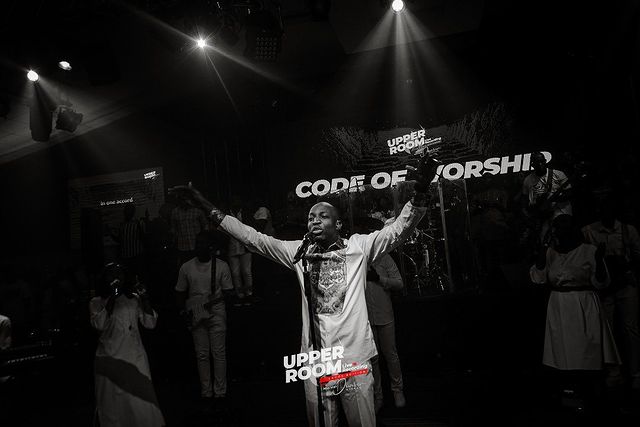 Dunsin Oyekan is a singer, worship leader, composer, producer, instrumentalist, and recording artist from Nigeria. Dunsin Oyekan, better known as The Eagle, is the founder of the Code Red Worship Experience.

Dunsin Oyekan has launched The Kingdom Album, with songs such as Breathe, Most High, No Words, Absolutely Nothing, and Holy. He also had hit singles such as “Fragrance to Fire,” “I’ll Be Here,” and “At All Cost.”

Dunsin is the sole son of the Gbadebo Oyekan family and was born on November 5, 1984, in Ilorin, Nigeria. He attended Ilorin’s Airforce Nursery and Primary School. After completing his basic school, he attended the Federal Government College in Ilorin for secondary education before continuing his studies at the Baptist Model High School in Ilorin.

Dunsin graduated from the University of Ilorin in Kwara State with a degree in Industrial Chemistry. Dunsin Oyekan is the father of two adorable children from his marriage to Adedoyin Oyekan. After a brief illness, Adedoyin Oyekan passed away on May 18th, 2019.

Dunsin Oyekan is a music producer who plays the guitar, piano, and drums among other instruments. Dunsin was the former music director of “THE AVALANCHE,” the COZA choir (Commonwealth of Zion Assembly).

His father, who enjoyed music and songwriting, persuaded him to learn to play the guitar. As a result, at the age of ten, he began singing and playing the guitar.

Dunsin released his 14-track first album, Code Red, in 2016. He has published over thirty songs to date, including the famous Na You, which featured American gospel singer Kim Burrell.

At The Experience Concert, Dunsin played Na You with Kim Burell. The Code Red Worship Concert and the Healing Room Worship Event are both organized and founded by him.

Dunsin Oyekan, the Eagle, and his wife were married for six years, from February 2, 2013 until May 18, 2019. The facts surrounding his late wife’s death were kept under wraps for a long time. However, it was learned that she had been sick for a short time. “I WILL FOLLOW,” his song, was published immediately after her death.

Dunsin Oyekan’s discography includes songs such as Open Up, Imole De, Keiyadosh, Breathe, If All I Say Is Jesus, and Fragrance to Fire, which have received critical praise. In 2016, he and Kim Burell played his hit “Na You” at The Experience, Africa’s greatest gospel music festival, which takes place every year in Lagos, Nigeria.

Tasha Cobbs, Kurt Carr, Don Moen, Byron Cage, Tye Tribbett, William Murphy, Kim Burrell, Sinach, Freke Umoh, and Micah Stampley, to name a few, have all been on his stage. He was designated one of the 100 Most Influential People in Christian Ministry in Nigeria by Ynaija.