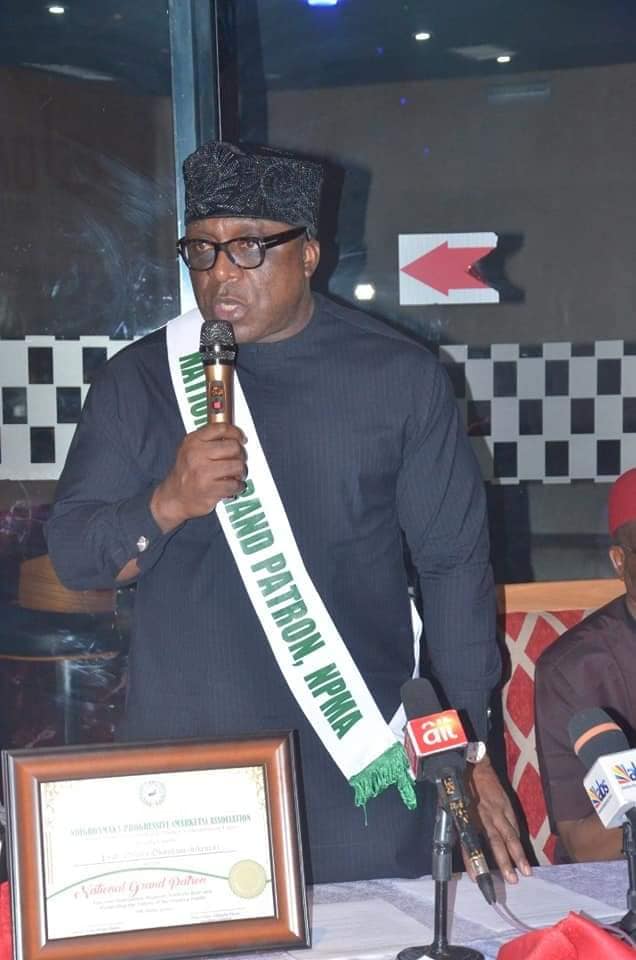 Chairman of United Nigeria Airlines, Prof. Obiora Okonkwo, was on Tuesday in Abuja, installed as the National Grand Patron of the Ndigboamaka Progressive Market Association, an umbrella body of Igbo traders in 58 markets scattered across Lagos state.

The investiture which took place at the prestigious The Dome Entertainment Center in Abuja attracted a cross section of Igbo socialites, entrepreneurs and political leaders.

Speaking at the event, Secretary General of the association, Comrade Chinedu Ukatu, said Prof. Okonkwo was appointed the National Grand patron of the association after a thorough examination of his business profile as an entrepreneur who started off as an apprentice at Onitsha Main Market.

He noted that Prof. Okonkwo’s rising profile sets him apart as a man of many parts who is hardworking and pragmatic in business.

According to him, the story of Prof. Okonkwo’s rise to is inspirational. He added that “he has been able to move from being an apprentice in Onitsha to rise to become an airline operator and owner. He has succeeded in several other businesses and that is why his choice as our National Grand Patron excited every member of the association.

“As it is, we are inspired by his story. And, we look forward to learning from him. All of us here have a lot to learn from him and we are happy that he accepted to become our National Grand Patron when we approached him with the offer. We are extremely happy and equally lucky to have him with us”, he said.

Presenting himself for the honour, Prof. Okonkwo said he was, at first, skeptical of the offer but after several investigations, he found that the association was credible and offered much for the Igbo nation.
According to him, the association stands on the threshold of history as it will make its presence felt in the process of uniting the Igbo nation for positive developmental action.

“Initially, I was skeptical of the group because I did not want to get involved with groups that trade awards. However, after a lot of introspection on why I was selected and investigation of the mission and vision of the group, I came to the realization that its motive and mission aligns with my vision for a better society and so it was easy for me to accept.

“With Ndigboamaka Progressives Association, we shall be able to advance the cause of the Igbo people beginning from the markets where we have a lot of Igbo people contributing immensely to the economic development of our dear country.

“The contributions of our traders to the growth of our country is something that we all must appreciate and seek ways to enhance it and build better synergy for the good of our country.

“Our brothers and sister who operate from the markets can no longer be seen, and treated, as dregs of society because their contributions to the economic growth of the country is huge. Therefore, we must work together to achieve the visions of the association for the overall good of our country”, he said.

Prof. Okonkwo, who was decorated with a commemorative sash by the leadership of the association, was also presented with a certificate of recognition as National Grad Patron of Ndigboamaka Progressives Market Association.

1 thought on “Biography Of Prof. Obiora Okonkwo (Age , Wife and Net Worth)”