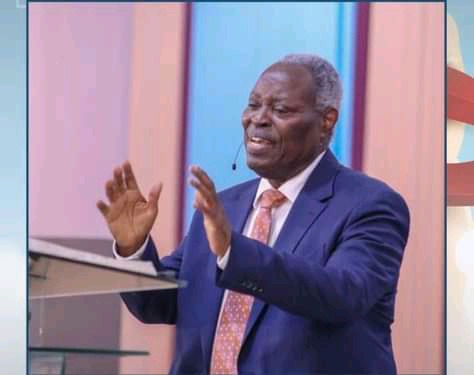 Nebuchadnezzar Has Gone To Heaven – Pastor Kumuyi , Pastor W.F Kumuyi spoke about Breaking the Barriers To Divine Solution and he told the story of King Belteshazzar, in the book of Daniel 5. Belshazzar worshipped idols and did many things that God did not want.

Daniel came to him and reminded him of how his father (Nebuchadnezzar) was proud, he was an idol worshipper and he experienced the judgement of God. But Nebuchadnezzar humbled himself and things changed in his life. He was also honest and he said ‘now, I’m going to praise the God of heaven” and he spake exactly what happened to him. He didn’t cover up or modify words and revealed that even though he was a king, he lost his senses and lost everything. “But now I have come to the Lord,


The man of God however revealed that when somebody is honest and he confesses his sin and he turns away from the sin, it is that that brings humility, honesty, and holiness in his life. Nebuchadnezzar had a mental problem because of the judgment that came upon him. But as humility, honesty, and holiness came in, all the evil life he lived in the past, passed away. Then he came back to himself and healing came for him and it made him realize that he was mad before. He then entered the kingdom and all his people were waiting for him after seven seasons of mental problems. You’d think that nobody will accept him anymore, but honour and happiness came back.

However, the man of God revealed that the time they were reading the story of Belteshazzar, Nebuchadnezzar was gone.” That means, Nebuchadnezzar has gone to heaven,” he said. And if a man like that can get to heaven, after all, that he did, then there is hope for all of us. But if you act like Belteshazzar, who knew the story of his father and you set a barrier before yourself by acting as if you don’t care, you will blame yourself.